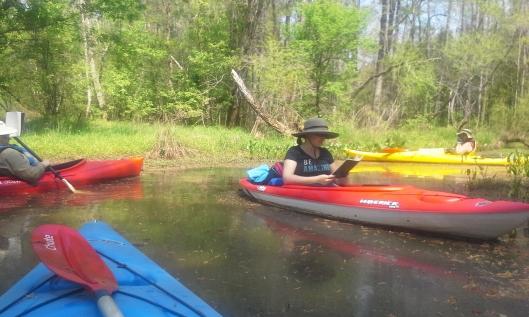 Saturday marked my second Pen & Paddle event. I kayaked on the Haw River again with a few other writers for about half the day. Unlike our paddle trip last fall, a last-minute change in plans encouraged me to opt for an out-and-back paddle from what would have been our terminus on Saxapahaw Lake. This actually made our day more convenient as we simply gathered and paddled upriver, turning back after lunch.

My favorite place where we stopped to write was a little cove. I thought we were paddling around one of the many islands in the river, but it turned out to be a dead end. It was shady and calm, so we pulled up our paddles and wrote. Near the end of the stillness of our 20-minute writing session, frogs started calling all around us. Loved the sounds! 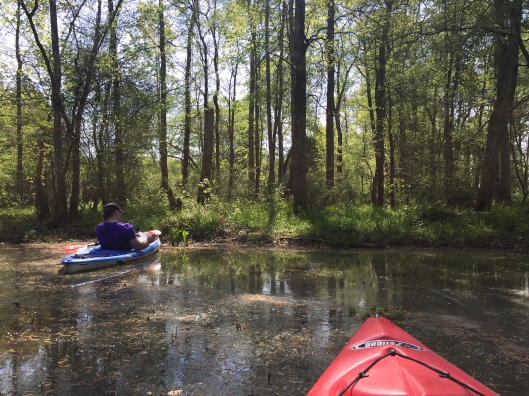 The frog’s sounds surfaced in some verse for poet Bartholomew Barker. (Click the prior link for one of the poems he wrote on this trip.) Bart dubbed his Moleskine from the last paddle as his ‘river journal’ and used it again! 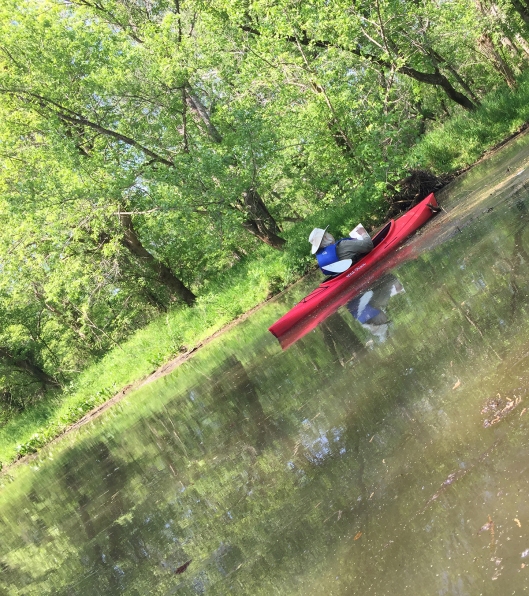 Ro writing on the Haw.

Novelist Ro Mason combined inspiration from nature with a New Yorker article she had read that morning. Ro had a minor capsize event, but she was an amazing sport about it – and Mimi came to her rescue! 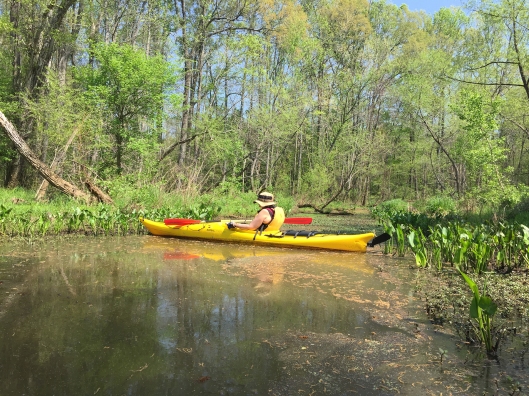 Mimi writing in the accidental cove we found.

Current North Carolina Piedmont Laureate Mimi Herman introduced a piece about her and her partner’s differing views of nature by describing his perspective as “Yosemite is his religion.” (I think she created the perfect description. That park instantly converted me on my first visit!) Learn about Mimi’s Writeaways in France and Italy, and follow her adventures on the Piedmont Laureate blog.

I penned the start of a short story that begins with, “The house feels like a home now that everyone is dead.” Also a few lines of short verse, fragments of which include:

We live on the back of a drowning turtle.

Now that they days are getting longer (and hotter), I will try to squeeze in an early morning or late evening paddle more often. Nature = constant inspiration.