I’m still in the early stages of building the Write Naked Eats corner of this site. Last time I covered the almighty bread and bread making. For the first time in the Eats series I’m dusting the flour off my hands and coating them in the sugar sticky sweetness of doughnuts.

Every Wednesday is “Doughnut Day” in our home. It’s been that way ever since we bought our house. We’re fortunate to have a superb bakery in town. (Scoop: They are expanding and opening a new location just one mile from our home!) As of this writing, Phoenix Bakery is the #1 Restaurant in Pittsboro on Tripadvisor. Their Boston Cream doughnuts probably secured that spot, but my love’s ultimate favorite is the cinnamon twist. Every Wednesday is buy-two-get-one-free at Phoenix so I arrive just as they open and get my love his two cinnamon twists and then I pick something random for myself. The box is always warm when I carry it into our kitchen. It’s the only morning that our dog Ramsay cries when I leave because he’s so excited for his morning treat: My love shares the coveted cinnamon twists with him. 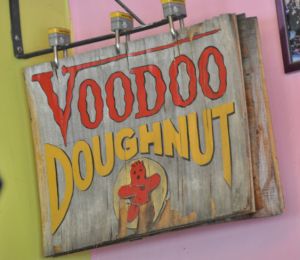 Why am I rambling on about some doughnuts in North Carolina when this post is about sweets in Portland, Oregon? First, you need to know that every Wednesday is Doughnut Day. Second, last week we were in Portland on Wednesday. My poet-friend Kelly Lenox (whose first book The Brightest Rock comes out next year!) moved to Durham from Portland a few years ago. She told me to be prepared to wait in line at Voodoo Doughnut. The city’s sweet landmark is open 24/7 and she warned me a line runs around the building at all hours. Fortunately, we hit it at the right hour – the line wasn’t even out the door when we arrived. However, the line stretched down the street by the time we sat down on the neon purple tables outside to enjoy the confectionery treasures. 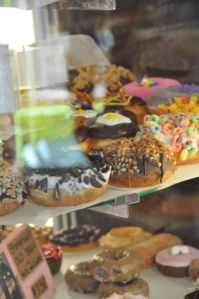 Voodoo Doughnut is open all the time.

I had scouted the doughnut menu online ahead of time and knew I wanted the Chuckles (peanuts, mocha dust, and chocolate and caramel drizzle on a chocolate glaze) and the Diablos Rex (vanilla pentagram–or pentacle if you rotate it!–with red sprinkles on a chocolate glazed chocolate cake doughnut). My love got the classic French crueller and the Portland Cream (basically a Boston Cream).

Living in North Carolina we have our fair share of 24/7 Krispy Kremes at our disposal. Plus, the day before our trip my love and I went to KK and enjoyed the hot-off-the-factory-line classics. Every once in a while I’ll get a cake doughnut at KK, but it’s oftentimes a miss. They’re usually stale. I’ve been conditioned to keep my expectations low for cake doughnuts because of this, and they were low when I got to Voodoo. They didn’t have to be. All of the doughnuts were fresh and might have been a few hours old at tops. Sometimes bakeries go overboard on ultra-sweet frostings and I’m stuck with a calorie-laden doughnut that isn’t worth eating and my face twisted in the sugar dump as if I’m sucking a lemon. This also was not the case at Voodoo.

However, these were not the best doughnuts of our stint in Portland. The best ones were found at Pip’s Original Doughnuts and Chai. These doughnuts reminded me of the stellar mini doughnut delights at Raleigh’s Sola Coffee Cafe – just better. At Pip’s you can order them as the traditional cinnamon and sugar, with a Meyer lemon custard, a nutella dollop with sea salt, honey with sea salt, or as a Dirty Wu – a mix of everything except the lemon curd. So we ordered them all. 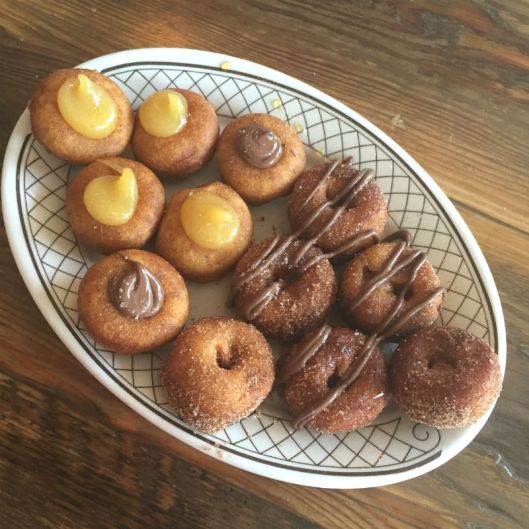 Pip’s Original Doughnuts were the win.

Another nice thing about Pip’s is that it follows a model similar to Hole in Asheville: doughnuts are made to order.

Pip’s also does chai flights, but we were pressed for time and about to drive a few hours to hike so I kept my chai intake to a single. I’ve never had chai choices before! I opted for the Heart of Gold: A black and green tea fusion with cardamom, clove, turmeric and coconut. Being that we had 80-degree sunny weather (so not Portland from what I’ve heard), I got iced chai. The cool spicy blend paired well with the whole shebang of doughnut flavors. Surprisingly mild, the Meyer lemon doughnut didn’t have the sharp and tangy citrus notes I anticipated. As for the others, you can’t go wrong with nutella, cinnamon, and sugar. You can only go wrong if you show up outside of Pip’s operating hours. They’re open 8AM-4PM everyday.

We tried to visit Blue Star Donuts, but they were sold out when we arrived several hours before their traditional closing hour. 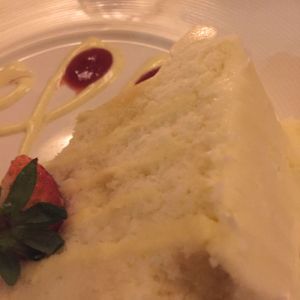 Our final night in Portland ended with desserts at Papa Haydn. Their dessert menu gave me choice paralysis, so I offered the waiter my top three choices and had him pick. He quickly put the Spring Champagne Cake and the Georgian Peanut Butter Mousse Chocolate Torte out of the running and settled on the Lemon Chiffon Cake. This crumbly-white-five-layer cake had the lemon zing I was looking for. The tart citrus taste of the lemon curd fraiche between the layers was toned down by the neutral cake. I didn’t want to share. My love ordered the Baked Alaska. This one was perfect for sharing and felt like three desserts in one – both in the flavor combinations and size. 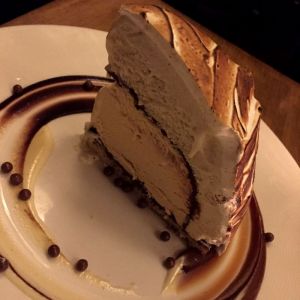 Now I’m posting this on Wednesday morning. You know what day it is.

7 thoughts on “Doughnuts and Desserts of Portland”