Whether you simply need to prepare for an open mic or you have a more formal structured reading you’re arranging your work for, how do you decide which poems or stories you will share?

Earlier this week I attended Two Writers Walk Into a Bar, a monthly event at West End Wine Bar in Durham, North Carolina that features one fiction writer and one poet. The poet was friend and fellow Living Poetry member Chris Abbate. Chris specifically chose to share poems with similar themes (religion, family, marriage) and in a chronological sequence (from moments in his childhood to present day). Not only did his selection carry the audience through a chord that spanned throughout his life, but the latter poems packed more of a punch because we heard them in the context of the stories that transpired before them. People who approached him after the reading echoed how his selection of the poems made his reading that much more powerful. 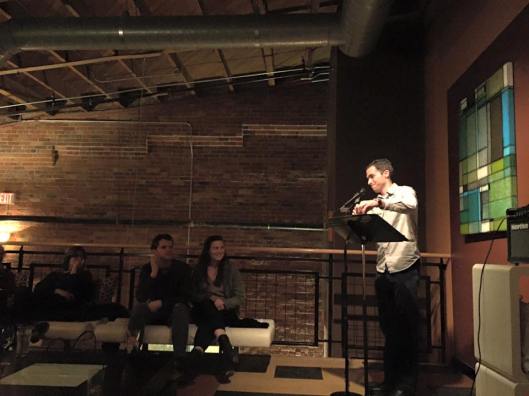 Chris Abbate reading at Two Writers Walk Into a Bar in Durham.

Another local poet tells me he usually changes the poems he plans to read on the fly, simply judging the audience’s reactions and getting a feel for what to share to suit the mood.

If I’m reading at an open mic I like to pick three poems that are not necessarily related. I choose one that I wrote years ago, another that I wrote recently (hopefully so new that it will have it’s “world premiere” at the open mic 😛 ), and a “cover poem” – one written by someone else. Since my poems are not very long, I feel like this selection choice doesn’t lose the interest of the audience. Plus, it gets an old neglected poem a little attention, tests out something new, and depending on the cover poem I choose–might introduce someone in the audience to a new poet.

When I prepare to read for an extended time, I try to pick a theme or two and then pick the “best of” poems, simply based on my personal gut feeling. Even with a more formal reading, I like to include one cover poem – usually something that complements the theme or it may be a poem that inspired one of the pieces I wrote.

How do you select your work for a reading?

4 thoughts on “Selecting Poems and Stories for a Reading”