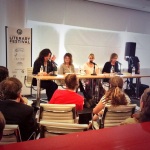 Has anyone else noticed the over-saturation of open mics, critique groups, and writing events in the greater Raleigh area? I was talking to a writer recently who commented on this. If you start looking into the various events you might suffer choice paralysis with the many options, but the nice thing about our corner of North Carolina: These are real writers. Yes, our group has many aspiring novelists – we also have several award-winning writers and members who consistently have their work published in literary markets multiple times throughout the year.

Just in this spring newsletter alone we have a Pushcart Prize nominee, a writer featured on a panel, and another who wrote a short story. Every day. For a year. Wow.

I continue to feel so fortunate to live in an area with impressive literary talent. It appears that by the time the summer newsletter rolls around, Triangle Writers will have more than 600 members! Please keep sharing your successes with me.

Write In
Saturday, March 28th
11AM
Organized by Triangle Writers, Room Reserved at Chatham Library, 197 NC 87, Pittsboro, NC
A write-in is where we get together for a time to write. There is no critiquing, no group discussions, few distractions. We’ll meet in the library’s double study room. Plan to write for 60 minutes straight. No need for reading of work aloud. If desired, we’ll discuss what we wrote. I’ll bring several writing prompt books everyone is welcome to use. After writing everyone is invited to stroll to town if the weather permits. Registration closed! All seats taken.

About our Featured Reader:
The featured reader is Garner, North Carolina-based Jason Lloyd Roscoe. Jason has been having vividly detailed dreams for as long as he can remember. The things that happen to him while he’s asleep are usually far more interesting than anything that’s ever happened to him while awake. He has been a fixture at Triangle-area open mics since 2013. He posts his dreams regularly on Facebook under the name “Jason’s Brain.” He thinks that people who don’t dream at all are weird. What do they do when they’re asleep?

Wendy Finger, a part-time resident of South Durham and (also resident of Lake Bluff, IL) has been selected as the featured Illinois Author for the Willow Review, an annual Midwestern literary journal. As the featured author, Wendy will have her short story “Nirvana” and excerpts from her novel Belle’s Story published along with a featured interview and full bio. Wendy will read selections from her pieces at the College of Lake County in Grayslake, IL on April 23rd. The magazine release date is scheduled for later in the spring.

Bruce Hillman is a radiologist and journal editor in Wake Forest. His first (non-medical) book The Man who Stalked Einstein: How NAZI Scientist Philipp Lenard Changed the Course of History is scheduled for release by Roman and Littlefield’s Lyons Press on April 14, 2015. Einstein is a creative nonfiction book. It describes the antagonism between two great scientists of the early 20th century. One became Hitler’s chief advisor on physics, and the other was Time magazine’s man of the 20th century. Hillman’s agent, Claire Gerus, recently sold his second book to University Press of New England. Titled A Plague on All Your Houses. The creative nonfiction book describes the events surrounding the discovery and early years of AIDS as seen through the eyes of the discoverer. Locally, Hillman will read from and discuss Einstein at Writers Night in the Forest on June 18 and at Alice Osborn’s Wonderland Book Club on June 26. He also has signings and media events scheduled for Milwaukee and Memphis and will be featured by the Jewish Book Council Network soon.

Dawn Reno Langley writes theater/dance/music reviews for Triangle Arts and Entertainment, normally publishing 1-3 reviews per month During the past couple of months, she has also been pleased to publish several nonfiction/essay/memoir pieces.  The Provo Canyon Review published “Amistad” in their Winter 2015 issue. The piece is about a friend’s journey with cancer and the many lives the disease enslaved. “Countries of New York”, the story of the journey one takes from abuse to home,  is forthcoming via Burrow Press in March.  And Langley happily announces she has won second prize in the Writers’ Workshop of Asheville’s Memoir Competition for her piece entitled “Amtrak to Boston,” the story of how travel both connects and disconnects us from self. She is currently sending that story out to prospective publishers.

Eryk Pruitt, who lives in Durham, will have his second novel HASHTAG published by 280 Steps in May 2015. His short fiction piece “Knockout” is a finalist for the Derringer Award, and two other short fiction pieces “Them Riders” and “The HooDoo of Sweet Mama Rosa” have been nominated for the Pushcart Prize. In the meantime, two short films written by him “Liyana, On Command” and “Keepsake” have finished post-production and have hit the festival circuit, with screenings in Durham to be announced soon.

Len Rattini, a writer in Cary, has published his Korean War military memoir Accidental Ambassador. Add it to your Book Club or Reading List.

Nicholas’ short story collection comes out in hardcover this spring.

Award-winning writer and filmmaker Nicholas Sailer completed his year-long project, A Story Each Day on December 31st of 2014, in which he wrote one short piece of fiction every day for 365 days. The ‘A Story Each Day’ Kickstarter campaign raised over 400% of it’s goal on Kickstarter, and has been featured in Indyweek, Silverlake VOICE, My Creative CoPilot, and as Project of the Day on the Kickstarter homepage. The hardcover book will be released in April, and is available for pre-order. But you don’t have to buy the book to enjoy the stories! The stories are being published online, one day at a time throughout 2015. Sign up here to receive daily stories from A Story Each Day via email.

Chatham County author, Timothy W. Tron, will be at the Chatham County Library in Pittsboro on Saturday, April 18th at 2pm for a Christian Author Panel. Timothy will join other Christian authors to discuss what influences their writing, their faith and excerpts from their work. Timothy is the author of Bruecke to Heaven: Children of the Light; a fictional tale of a Waldensian family based on a true story set in the Cottien Alps around the year 1170 AD. Timothy is currently working on subsequent books to his first novel which will be part of a future series.

Hugh Willard, author of the Goodwill Vultures Club Series, has penned a debut YA fantasy novel Degotoga, published through Dark Alley Publishing on February 27th, 2015. The story follows Degu, a young man with Cherokee heritage, as he unwittingly embarks on his first vision quest into the Spirit World. He is searching for his long lost twin brother while also helping the restless souls of the Cherokee who died along the infamous Trail of Tears.