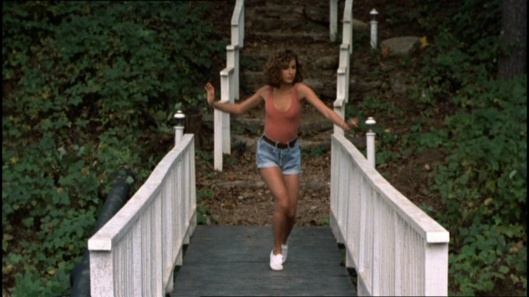 I stopped in Asheville on my way to Georgia for the Atlanta Writers Conference. The plan was to meet up with another Triangle Writers member and carpool from her family’s new home on Lake Lure. One of her relatives asked me if the cove across the street looked familiar–it did, but I couldn’t place it. Turns out it was one of the spots where Dirty Dancing (1987) was filmed. The same gazebo on the water where Baby (Jennifer Grey) gives the speech to her dad (Jerry Orbach) still exists on Firefly Cove.

The staircase–although now highly modernized with copper-topped solar accent lights–is the same one Baby walks on throughout the movie and in an early scene carries a watermelon.

I couldn’t remember what pose to strike. Whatevs! That’s why I’m a writer and not a dancer.

Asheville’s diverse shops make me very happy, but one of the things I love best is serendipitously discovering something I never knew existed. For instance: chocolate pasta. Hey, now! (Note: This writer has never eaten Ramen noodles.)

Plus, I don’t know what the writerly universe is trying to tell me, but everywhere I looked I found something French. Parisian lattes, creperies…I made Asheville my own little French delight. (Even though Asheville is already known as “The Paris of the South.”)

Why not a little bit of Belgium? There are just as many chocolate shops throughout Asheville as there are book stores. Chocolate Fetish tempted me. 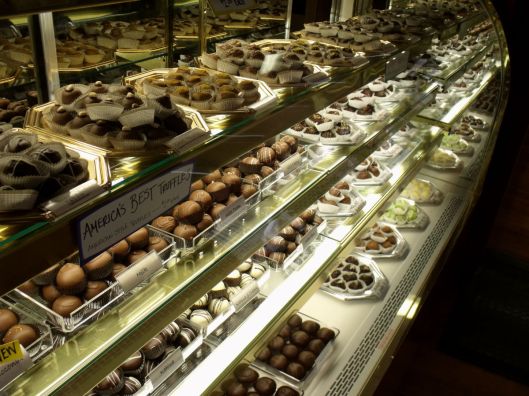 Chocolate Fetish on Haywood in Asheville

This shop offers pecan or pistachio “frogs” – apparently Nestle has trademarked the term “turtle.” I opted for two truffles. 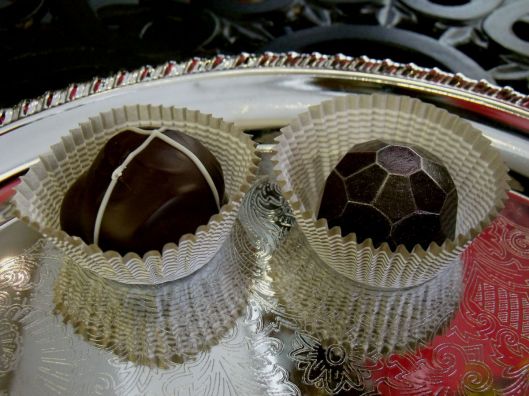 Asheville is definitely a city for writers. F. Scott Fitzgerald used to vacation here and Carl Sandberg and Thomas Wolfe have strong ties with the city. (For any writers looking for a coastal escape in North Carolina – see an earlier post about New Bern.)

But, back to business, I also squeezed in delightful meetings with Eddie Cabbage, Asheville poet extraordinaire (Who has composed a tremendous poetry manuscript entirely on his Blackberry!), and Bill Kopp, webmaster for the Atlanta Writers Club. (He says the chocolate pasta will go best with pork!) A very busy weekend for a writer, but after the holidays I will be back in Asheville to host Freelance Writing 101, a workshop for writers that includes brunch on January 28th at Books & Breadboard.